How to Start an Investigative Essay 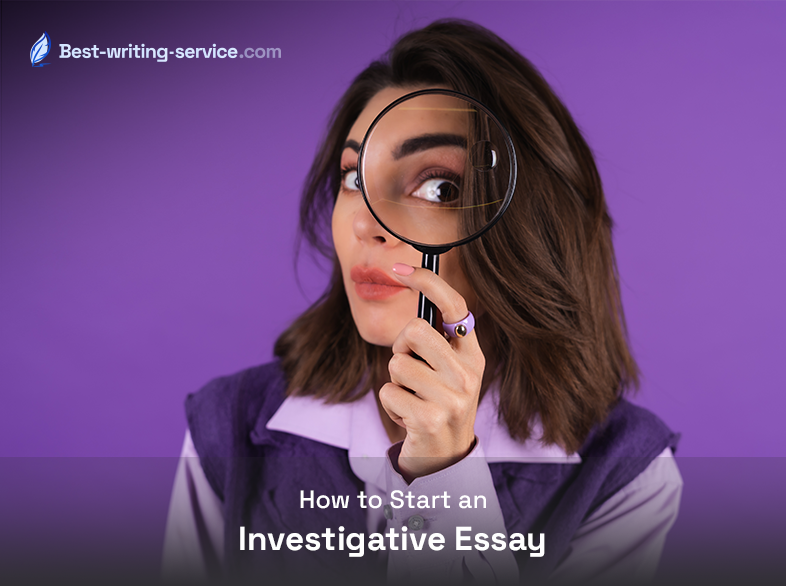 An investigative essay is quite similar to other academic papers. Therefore, it must contain an introductory paragraph and a concluding paragraph.

Like in the majority of other essay, there ought to be a “hook” in the first section of the paper. An effective “hook” must grab the attention of readers and keep them interested in continuing reading the paper.

An investigative essay may begin with the following elements:

If you cite other researchers, you will show that you are well versed in your discussion topic, and that you conducted a thorough search of relevant literature. Therefore, you should try to refer to credible sources to support your arguments. For instance, in your introductory paragraph, you may refer to Sigmund Freud if the topic of your paper is gender roles, social relations, or causes of depression.

An attempt to make the audience express their views

If an author appeals to the audience and encourages readers to form opinions about particular issues, readers might become more interested in the work. When composing a paper about a particular industry, for instance, an author might encourage the audience to ponder over the significance of that field and what life would be without it.

An impressing statement or comparison

You can motivate the audience to continue reading your work by impressing or thrilling them with original thoughts or statements. To achieve such an effect, an author may employ numerous rhetoric tools. When writing about the spread of a certain disease or condition, for example, an author may provide statistical data and inform the audience about the number of people dying from that disease every day.

A witty or humorous expression

Since an investigative essay is less formal type of academic paper, one may even use a humorous or witty remark related to the subject of discussion.

This paper focuses on one of the most important aspects of language, or, putting it in other terms, on one of the functions of language and its application in practice. It is going to show that a certain group of people will use a certain sort of language, by which it is always possible to conclude something about their origin, their background and so on. This knowledge, which allows to make such conclusions, can be used for practical purposes.

The goal was, basically, to identify a group of people and see what peculiarities are characteristic of their language. It is quite understandable that in everyday life people use a certain type of language and there will be peculiarities, which will be similar for all the representatives of one particular group. And this set of peculiarities may help make certain conclusions as for the characteristic features of people belonging to this group.

When choosing a group, I hesitated between two groups, one being the professors at my university, and the other – a group of my friends, whom I frequently communicate with. Despite the hesitation, I finally chose the friends, and the motive for my choice was quite simple: this group appeared as a much more integral, single unit. Tutors at the university had one significant thing in common, and that is the place of work. However, even the subjects they teach are different in each particular case. Thus, the things they are interested in are also different, or even, to be precise, diverse; moreover, they are of different age groups, and this is what makes it harder to unite them into one integral group, and therefore I addressed my friends. They are all of approximately similar age; they are interested in a set of things, common for the entire group. This group is not large and includes about seven to ten people, who communicate with each other, sometimes within the group, and more frequently, on one-to-one basis, and sometimes within smaller groups.

My next step was to identify the language they were using, and that had to be a sort of a vocabulary, which could be used for characterizing the group, for making some conclusions about it. Therefore, I spent a few days taking notes, and found a few peculiarities, which I believed to be worth mentioning and discussing within this paper.

Peculiarities of the Group’s Language

First of all, and this may even not be addressed as an actual peculiarity, I found that my friends were heavily using slang, which is normal for the people of our age group. Youth oftentimes uses slang in order to underline their social status, if this is the correct word to use. Some of my friends, including myself, are international students, which also leaves a significant trace, influences the way we speak. But these cannot be called general peculiarities. Thus, I focused my attention on the filler words, heavily used by many young people. It is quite understandable – the emotions are hot and the desire to express everything in one flow of speech is intense. It is impossible to make pauses, thus, to fill the possible pauses, the fillers are being used. And when taking notes after my friends, I found such to be most frequently met: “terrific”, “cool”, “perfect”, “amazing”, “great”.

These even cannot be addressed entirely as the fillers. They are meant to express the desire of a person to agree with the idea or to sign up for the plan suggested. However, they are used beyond their normal meaning; the person, who says “terrific” may not necessarily find the plan “terrific”, but rather simply acceptable, quite reasonable or something of the sort. By saying “cool” people oftentimes mean absolutely nothing, and it is being intensively used in order to just support the conversation, to send a message to the conversational partner, hinting at the fact that he is being listened to, followed. His words, his ideas and his judgments are not being disregarded.

There is one thing I noticed, however, about this category of words, frequently applied by the people belonging to my social group. There are other words, which have approximately the same function. Such being “okay”, “sure”, “yes” and a number of others. Such words are much emotionally neutral. They do not have any additional connotation, except for the desire to agree with the conversation partner, show that he is being followed, and that would be the end of it. These words hint at the fact that the people, applying them, look at the life with positive expectations.

I also found another category of words, such being also fillers, but of different nature. These are used in order to fill in the blanks, which appear as an attempt to find a proper word or to pretend that the flow of thought is consistent, to hide one’s hesitation and so on. This category of words was mainly represented by such words and word combinations as “a sort of”, “a kind of”, “so to speak”, “you know”, “you see”, “like” and a number of others. These words are very clear signs of the lack of self-esteem. The people, who oftentimes use them in their speech, are very likely to have doubts as for what they are saying or how this is being comprehended by the people, who listen to them.

Another category of specific vocabulary, applied within the described group of people is specific academic vocabulary, since absolutely all the members of the group study at different educational establishments.

These observations are all very interesting in scholarly context. But it is important to understand what they are good for in practical respect. Practically speaking, this sort of speech analysis may be useful for a number of spheres of human activities. First of all, it can be useful for development of IT technologies and workouts in the field of artificial intellect. Development of various dictionaries and textbooks for foreigners, who do not naturally understand the difference between styles and need to know, what can be inferred out of language and the specific words, used by one or another person. Such workouts are also critically important for psychologists, giving them clews as for possible state of their clients.

This knowledge will also be useful for the secret services of different sorts. Speech is something that may disguise a lot about a person regardless of his will. It is, however, important to understand, that some people are very talented in linguistic respect, and thus may very well pretend being who they are not in real fact.

Researches in the field of human speech are very important for many spheres of human knowledge and for the overall development of science and technologies. Unfortunately, many scholars underestimate the significance of these researches. This is, oftentimes, the case with the scholars, who work in the field of sciences and believing the humanities not scientific enough. However, serious consideration of speech has already opened new horizons before the human kind – text-to-speech engines, voice recognition modules are all results of such thorough analysis. And the informational technologies are advancing very rapidly in this direction. Many devices can be controlled solely by means of human voice, without application of keyboards, mice or other input devices. This gave new opportunities to the people with disabilities and found numerous other applications. In general, such researches need to be undertaken and paid more attention to.