This subject is important as it creates awareness on the serious electric energy wastage issue. We need to save on energy so as to reduce dependence on fossil fuels that are becoming increasingly scarce. Therefore, I have decided to research the problem and come up with a solution to solve this problem we face daily in our lives. As other resources, electric energy is a scarce commodity and it must be conservedensure to that we use less money and energy. When we conserve electric energy, we also save on water used in power stations to generate electrical energy.

Quantitative research is the research strategy that will be used to collect data. Descriptive statistics will be used to analyze and present data. In doing the research, both primary and secondary data will be used. During the first day of my research, I took time prior to the first day to explain about my research to the family. I explained to them I need to collect their meter readings daily and they gave me the permission. I took measurements for appliances used individually on a daily basis by every member. To compute the total power consumed by every member of the family, I added power consumption for every appliance the individual used. Then to obtain the total power consumed in a day, I added total power consumption from every family member.

To calculate power consumption for every family member on a certain appliance, I used the following formula:

During week one, I took meter readings dailyand calculated how much electric power is consumed daily.

To calculate the average power consumed in a day, I used the formula;

Therefore, for week one, the average power consumed daily is; 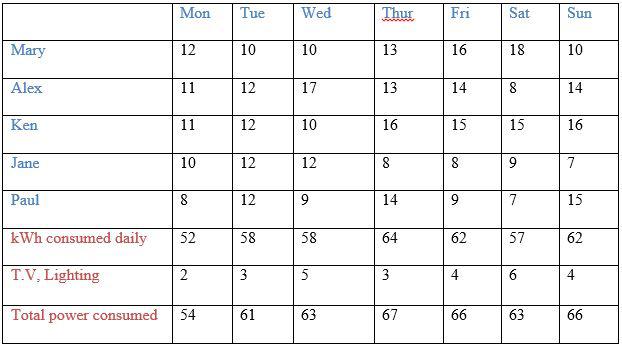 The table shows the amount of power each individual uses every day and the total power consumed daily by the family. Meter readings were also taken daily at 6 o’clock in the evening.

After the first week, I explained to the family about energy management awareness and measures they could put in place to reduce energy consumed and hence energy costs. The procedure in week 1 was repeated for week 2 and week 3 to obtain the data in the tables. The measures include: 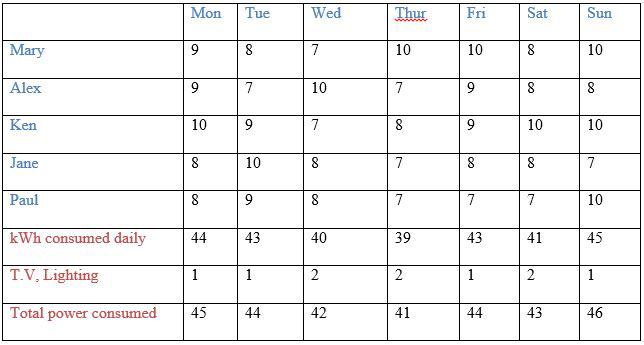 From table 2, the average power consumed daily is: 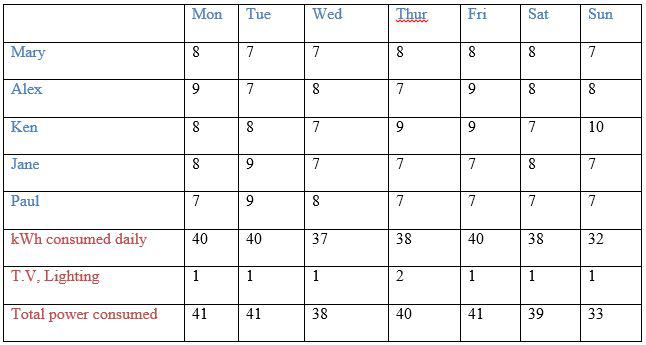 The challenge was a success as I managed to collect data and implement the solution. The power consumption reduced significantly by the end of the third week. Some of the obstacles faced include uncooperative members of the family. To solve this, cooperative participants could be offered gifts to encourage cooperation throughout the research. In improving the results, further steps can be taken to ensure further reduction in power consumption. Such measures include using of energy saving bulbs.

The project could be expanded in the future through incorporation of a number of families. Data could be collected from families who have the basic appliances and compare with families who have additional appliances such as air conditioners, washing machines and even electric cookers. Electrical energy management should be advocated for to ensure that we spend less and conserve our natural resources.

Dec 19, 2019 in Management
back
Military Ethics
next
First World War and the Role of Diplomacy